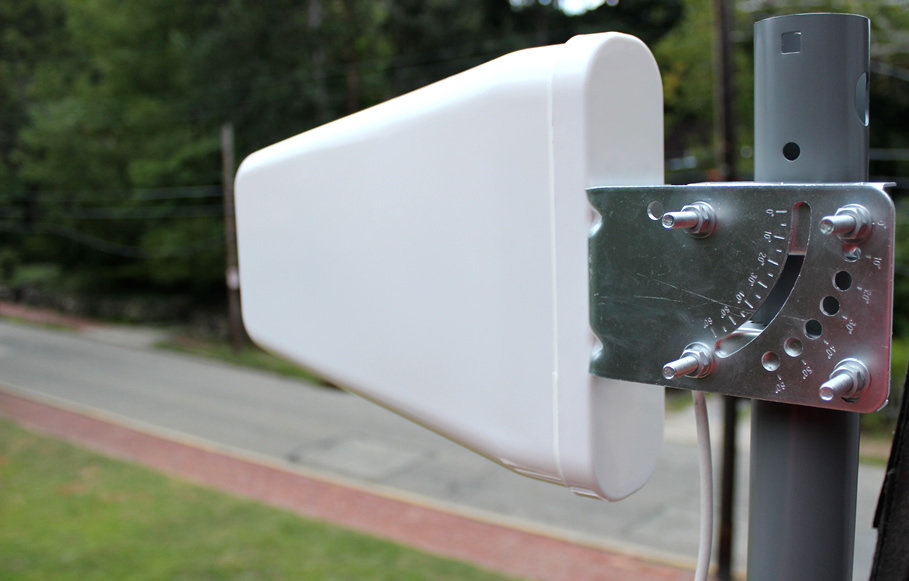 How to Aim a Yagi Directional Outside Antenna

Even if you know exactly where your carrier’s tower is located, it’s still a good idea to go through this aiming process! The cell signal may not be coming directly from the tower either because of obstacles in the way (buildings, hills, etc.) or because the tower may not have an antenna aimed in your direction.

Preparing to Aim the Antenna

To start, temporarily setup your signal booster system by running the cables through doors or windows, connect everything together, and power on the system. To aim the antenna, you’ll ideally need two people. One person will stay inside with a cell phone from each carrier that you want to support. The phone(s) should be in Field Test Mode so you can take decibel signal readings, which are more accurate than bars. Place the phone(s) on a table or other surface between 10 and 20 ft. away from the inside antenna and leave them in the same place until the aiming is completed. If it’s a directional inside antenna, be sure that the front of the antenna is aimed directly at the phone(s).

Once you have the signal readings, you’ll want to find the direction that gave you the strongest readings for al of the carriers that you want to support. If you took decibel readings, then look for the readings that are closest to 0. For example, a -70 dB reading is better than a -90 dB reading. The stronger the signal, the more coverage you’ll get from the system.

If, while testing, you find that there are warning lights on the booster, consult your owner’s manual for information on what caused the warning. If the warning light is due to oscillation (feedback), try retesting in that direction but increase the separate between the inside and outside antennas. If the warning is due to overload (too strong of a signal coming from a nearby tower), then the aiming process will still work correctly by helping you find the direction where the system performs the best. In either case, you should try power cycling the booster after re-aiming the outside antenna to ensure that the booster isn’t shutdown due to conditions at the previously aimed direction.

In some rare cases where you receive overload warnings and you aren’t able to get the system to work well, it may be necessary to try different outside antenna locations or to add inline attenuators. Contact us or the manufacturer for help troubleshooting these situations.

View All Carriers
My Quote

You have no items in your quote.